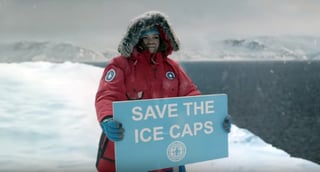 This motivational video describing one Hero's Journey takes a humorous approach to participating in worthwhile causes.

We're all drawn to causes that benefit mankind, or even animal-kind! This tongue in cheek motivational video for Kia makes us think twice about volunteering to make a difference. The romanticized notion is quickly dispelled in several short vignettes.

This motivational video opens with Melissa McCarthy driving a Kia Niro through the countryside. We hear a voice from a caller, "Hey Melissa, the whales need your help!", with Melissa McCarthy's dreamy response, "I love whales!" Next thing we know, Melissa is on her own powered inflatable, shouting to others on an inflatable next to her, "Let's protect those whales!" Just then a massive whale breaches the surface next to her tiny inflatable, and lands on the back of her boat, sending Melissa flying through the air as a projectile to the side of the ship.

Next, we're back in the Kia and Melissa hears, "Hey Melissa, now the trees need you." We see Melissa excitedly clinging to a tree, with the sign behind her that reads, "Save the Trees", as she embraces and kisses the tree. At the base of the tree, the logger starts up his chain saw, with other cut down tree stumps in the background. The tree begins to fall, with Melissa still clinging to it. She is catapulted as the tree partially hangs over a cliff, and with enhanced visual and sound effects, and we see Melissa forcefully ejected, to fall off the cliff.

We're back on the outside of the Kia again, with Melissa is presumably driving, while we hear the call again with the same person's voice, "The ice caps are in trouble."  We see Melissa walk to the edge of an ice cap to plant a sign that says, "Save the ice caps", only to have the bottom of the sign post split the ice cap that standing she's on, eventually falling between the ice cap split to the ocean below.

Then the voice, "Hey Melissa, now the rhino's need saving!"  Melissa, looking a little smarter now, says to herself out loud, "Rhinos?" Next we see her running from a massive rhino through the tundra, clinging to her sign "Save the rhinos", and then she gets booted from the horn on the rhino. To which the announcer states, "It's hard to be an eco-warrior, but it's easy to drive like one...introducing the most fuel efficient crossover, the Kia Niro" followed quickly by Bonnie Tyler's 1984 hit song "I Need a Hero".

Looking to tell a story that helps people be their own eco-hero, or a hero of for some other cause? Click the button below for a free consultation about licensing motivational videos like this one, or creating a new concept to match your desired result.