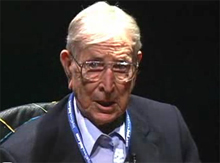 You don't need to be a sports enthusiast to know about the late John Wooden...considered one of the greatest basketball coaches of all time. He influenced me personally: not because I played basketball, but because he lived and taught certain principles that to this day motivate me.  For instance, he focused his players on being a team and helped them recognize their Creator, and to be the best they could be.