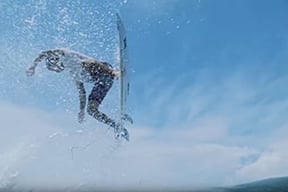 When dreams drive us to do things that we've never done before, in places we've never been before, we say, "I can't stop", as Julian Wilson says in the pursuit of a world title in this motivational video.

This motivational video opens with Julian Wilson standing on the sandy beach during one of the most beautiful times of the day, with storm clouds overhead. We hear him tell his personal story while we see images that support his story.

"I'm always looking to be the best version of myself; it's in my blood." Following are a few quick shots of stunts he does on the surf board, things that most people wouldn't dare to do on a surf board. He continues, "I grew up

across the road from the beach." We see him walking to his house, a simple, tropical location. Julian walks into the house and picks up a photo of himself as a boy off a desk, "I started surfing when I was 3. Both of my brothers surfed..." Julian opens the single garage door to reveal a long room filled with surf paraphernalia. He continues, "And I just grew up trying to catch up with them, trying to chase them."  Julian spots a picture of himself as a youngster with a surf board over his head, and he grabs a framed picture of his two brothers ready to surf.

In the next scene, it's early morning with the sunlight streaming in, and he goes into the garage to stretch, and continues, "Now it's about the chase of the world title", followed by another series of stunts on the waves, flashing from scene to scene. We're back to a stretch where he's laying on his back and he begins arching his stomach towards the ceiling. As he lifts himself up, he explains, "It's maneuvers that haven't been done before." Suddenly we're back in the ocean where Julian rides his board into the sky, perpendicular to the waves.

He continues, "Places in the world that haven't been surfed before..." We watch using a POV camera as he walks through difficult access areas to the beach with a board over his shoulders, with a flash of him holding a picture as a youngster standing next to a surfboard that is 3X his size and another series of images of him surfing difficult tricks. "It's never ending", followed by multiple images of his never-ending pursuit of the dream. Then we're back in his garage, early morning, as he prepares for his day. "There's no slowing down."

Next we're on the beach, he's walking with his board to his side at sunrise. "They'll never be a time when I'm not surfing." The camera swings around from his face to to his back as he walks into the ocean with his board. "I'm Julian Wilson, and I can't stop."  Up flashes the hashtag "#CantStop" on the screen, with an amazing scene as he surfs a tube that closes around him, and yet comes out unscathed.

Our sales organizations are similar in many ways. We pursue a dream, we work at it every single day, morning, noon, and night. We practice, dream, work on it. We can't stop...we keep on pursuing it. To create a story about one of your top performers, or to license this motivational video with Julian Wilson, contact me.